Fundraising nonprofit organizations online fundraiser safety supplies schools sports teams
February 19, 2021 Samantha
Fundraising is a task that many people dislike. It can be time-consuming and difficult to manage, but fret not! GetMyKit is here to help! Whether you are fundraising with your school, a community center, or any other organization, the people at GetMyKit are there to help! This will amplify the community service aspect of your fundraising goals. Along with whatever cause you may be fundraising for, you’ll also be promoting emergency preparedness in your community!

1) GetMyKit Will help to manage your campaign!

It can be tough to get started - or even know where to start - especially if you don’t have much fundraising experience. The hard-working folks at GetMyKit will help to manage your campaign. All you have to do is distribute a coupon code to your community - and it will even give you 10% off! They will manage the purchases through their site and ship the orders purchased during your fundraiser to your school or organization after your fundraiser is over, for you to distribute to your shoppers.

2) An easy-to-follow plan is mapped out on their website!

Even with management support, you might still have questions! At GetMyKit.ca,​ there are clear steps to follow to help you through your campaign. There are numbers and email addresses listed for optimal support during your fundraising endeavours. 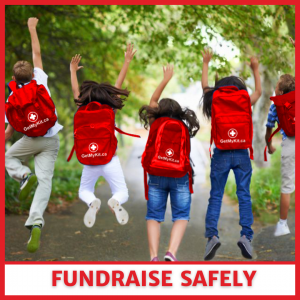 3) Savings on every order with your custom code!

Whether you are fundraising for your school or another organization, for each order placed using your coupon code, parents get 10% off when using the custom code created just for you, and your school or organization gets 25% of every dollar spent! All of this support will help make your fundraising campaign become the best that it can be! If you're interested in learning more about their contactless fundraiser program, Submit a no commitment inquiry form, and they will be in touch with you.
Written by MWP Staff: Eva Almgren
January 10, 2019 Chad McGillivary
GetMyKit has been helping schools across the country fundraise for their programs for two years now. We offer a great program, but we’ve also learned some things along the way that will help you succeed with any fundraiser. 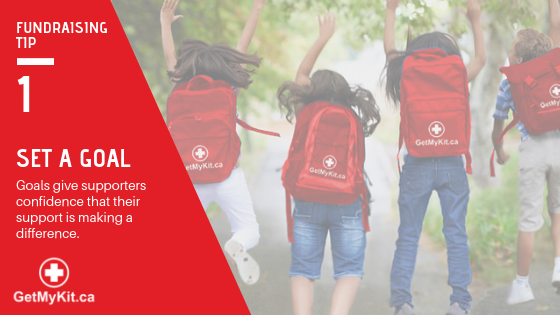 Set a Goal: Goals give supporters confidence that their support is making a difference. Often, schools are in a fundraising routine with no goal in mind. It’s difficult to motivate families, let alone outside supporters, to support your fundraiser if you don’t have a goal. When will the fundraiser end? How will you know you’ve succeeded? Are you trying to raise $1,000, or $10,000? 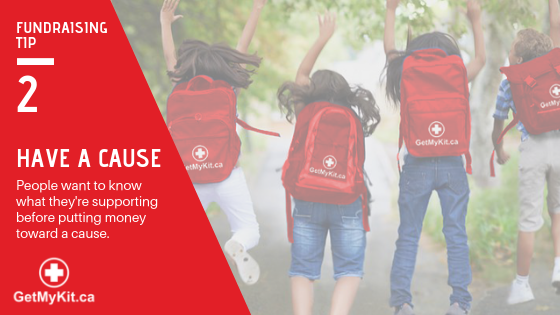 Know Your Cause: People want to know what they're supporting before putting money toward a cause. When we talk to schools about their fundraising goals, many just don’t have one. They need money for lots of things and never really specify. From our own experience as parents of school-age kids, we’re far more likely to support Mary’s grade 7 grad trip than the PAC’s pointsettia fundraiser, because the latter never identifies what the money will support or how it will support our kids. If you identify a cause that you’re fundraising for, no matter how big or small, supporters are more able to see how their money is helping the cause. We’ve had GetMyKit fundraisers support new carpets for the preschool room, new outdoor seating for sporting events, and band trips. 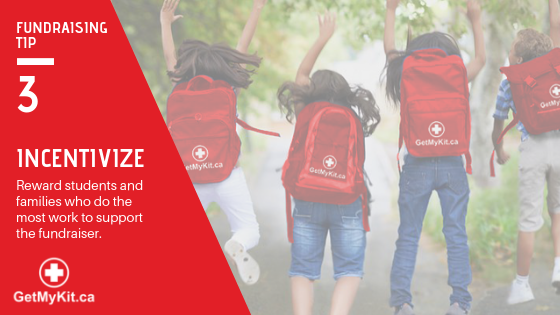 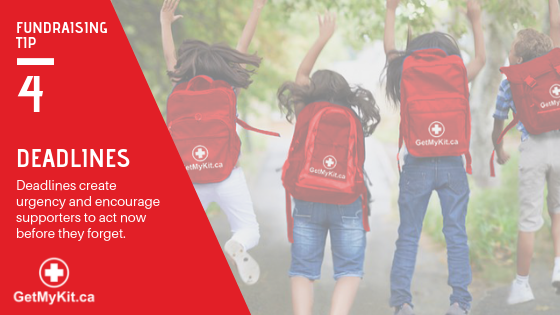 Set a Deadline. Deadlines create urgency and encourage supporters to act now before they forget. We’re a very busy, easily distracted society today. Set a short term fundraising period so supporters don’t put the information and paperwork aside and forget about it. If you know you only have two weeks to purchase something, you’re more likely to act fast. If you have two months, you’ll “get to it later” … and then never get back to it. Most GetMyKit fundraisers run for 2-3 weeks. 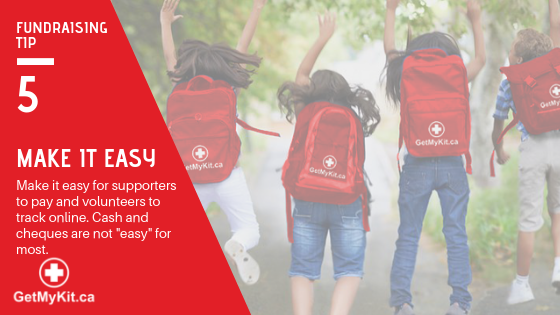 Make It Easy. Make it easy for supporters to pay and volunteers to track online. Cash and cheques are not "easy" for most. We’re busy, and we don’t carry cash and cheques. Many schools are switching to an online program for their fundraising needs so parents and supporters can pay for hot lunch and fundraisers online. Many of our schools have used Munch a Lunch, for example. 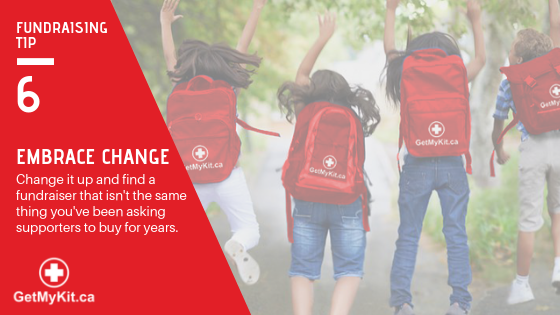 Embrace Change. Change it up and find a fundraiser that isn't the same thing you've been asking supporters to buy for years. One of the most appealing things about a GetMyKit fundraiser is that it’s different. It’s not the same tired fundraiser you’ve been buying every year whether you want it or not, and it’s something you need. 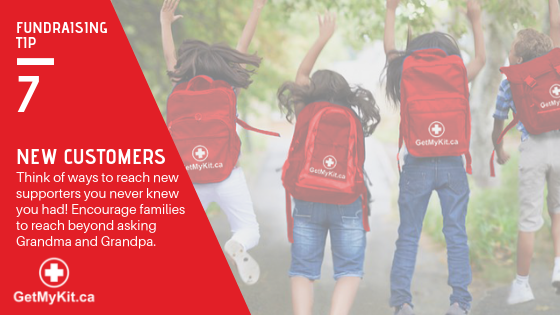 Find New Customers. Think of ways to reach new supporters you never knew you had! Encourage families to reach beyond asking Grandma and Grandpa. Mary has sold those delicious cookies door to door, in front of the grocery store, on Facebook, and had retail stores sell them for her. Very few of her sales were to Grandma or her parents’ coworkers. 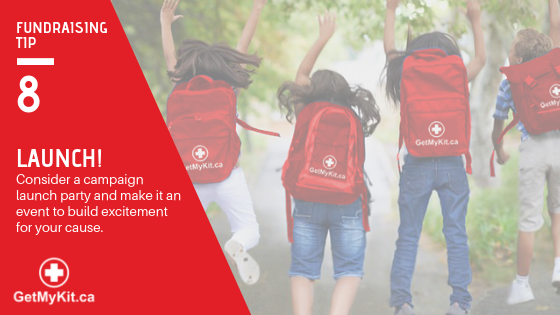 Launch! Parents get stacks and stacks of paper coming home each week, and it multiplies if you have more than one child in the same school. It’s easy for fundraisers to get lost in the shuffle. Consider a campaign launch party that involves not just the school but the broader community. Make it an event. GetMyKit can support Vancouver Island and Lower Mainland schools with in-person support to put together an emergency preparedness event in your community and kick off your fundraiser big time. Want more information about GetMyKit fundraisers? Check out our fundraising page or contact one of our Fundraising Coordinators today!
earthquake supplies emergency kits Fundraising school emergency planning School Fundraising
April 17, 2018 Chad McGillivary
Each year, the Federal and Provincial Governments' Department of Public Safety and Emergency Preparedness organizes an emergency response initiative called “Preparedness Week”.  This year, it runs from May 6 - 12.  It is similar to BC ShakeOut in its objectives and goals; provide resources  to ensure that all Canadians are teaching and practicing emergency preparedness in your school and community. As this brings emergency preparedness to the forefront of people’s minds during that time, we thought we'd share some information about GetMyKit's free, online fundraising program in hopes that you, or someone you know, would consider participating. 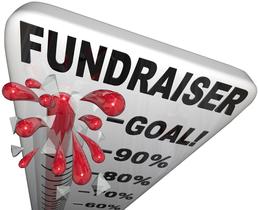 Since the program's inception in September 2017, over 30 clubs, schools and organizations have participated and raised thousands of dollars.  Because they had chosen to participate, they made a positive impact in their community. Almost 100 more families - who purchased their kits through their campaigns - have become emergency prepared.  We believe that this is the tip of the iceberg and there's more to be done!  There are fundraisers happening as we publish this blog and we look forward to having your organization join in this growing movement. Westmont Montessori, who ran two campaigns this year, writes: "Want a fundraiser that is meaningful, fun and easy to coordinate? Getmykit.ca is the one for you!  We ran 2 campaigns - one in October and the other in February - and raised $775.00 for our school! Jessica provided you with everything you need: templates, flyers, information, a fundraising code unique to you, and much more. What really helped was having Jessica come to our school for a couple of hours with kits for parents families to see exactly what goes in their high-quality kits.  Thank you for making our fundraiser so meaningful and helping us raise money for our kids."  - L. Chevalier

How Does the GetMyKit Program Work?

We will manage all purchases through our site and will ship directly to your buyer.  You will get a complete report on how many kits were purchased using your code along with your fundraising payment. We will help you promote your fundraising campaign by sending you information to distribute to your community (PDF poster, Preparedness Guides & Plan documents, social media templates & communication templates in Word).  There is some work to  be done on your end however but we promise it’s not a big assignment.  You will be responsible for finding other unique ways to promote your fundraiser, communicate your goals and efforts, and keep the excitement going during the 3 week period.  As this is a Federally and Provincially promoted initiative, there is a wealth of emergency preparedness information that you can use to show the importance of having an emergency plan and ensuring that everyone has supplies at hand. We will send more information to participants and will be utilizing social media promoting BC Preparedness Week.

GetMyKit staffers are also happy to help you and your community with their emergency plans by being Presenters at an Emergency Preparedness Workshop at your location.  At these events, we discuss why it's important to be emergency prepared, how to make an emergency plan and what to include in your supplies.  We can tie this event into your fundraising campaign.  To find out more, contact 1-866-673-1222 or email info@getmykit.ca. Help your community get prepared while raising some extra funds for your group, club, school or organization!
September 8, 2017 GetMyKit.ca

How many fundraisers have you participated in where you bought or sold “stuff” – the coupons that sit in your junk drawer, the chocolates that you really didn’t need in the first place, trinkets of all sorts that collected dust – all items that didn’t really have a meaning or a deeper purpose.  And so, GetMyKit Fundraising was born, an easier and more meaningful way to raise funds for your organization. GetMyKit offers a chance for you to help make a difference in your community by providing high-end emergency safety kits that will help protect and prepare their loved ones. Chocolates and cookies disappear, but emergency preparedness is invaluable. In addition to selling a meaningful product, we’ve developed a completely no-fuss process that couldn’t be easier for your group to administer.

In today’s world, we are fully immersed in the digital age and are always surprised how many fundraising campaigns are still stuck in the dark ages with their door-to-door canvassing. While this classic technique may be nostalgic, it is time-consuming. To fix this, GetMyKit Fundraising has streamlined the process. We’ve cut out the walking from house to house, the harassing your co-workers in the break room, and the begging your relatives at Sunday dinner. Now, you can do it all online! Once you have registered your group you will get a unique promotional code for you to track your progress. We have templates for a variety of mediums like: These templates will bring your supporters to a GetMyKit order page where they can use your organization’s unique promo code to get great deals on the GetMyKit package of their choosing. Once they have submitted their order, you get paid and we do the rest. We handle all the order processing and shipping so all you have to do is sit back and relax and watch those funds roll in. The future of fundraising is here. The time is now to be prepared! Click here to learn how your organization can benefit from fundraising made easy that you can feel good about.