British Columbia is headed back into another one of its riskier seismic seasons, raising the risk of “The Big One,” earthquake experts say.  Every 14 months, the Cascadia subduction zone — which runs from northern Vancouver Island down to northern California — experiences what seismologists call a “slow slip.” 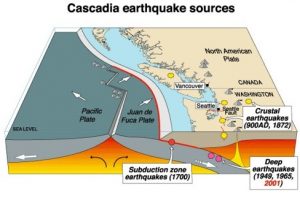 The Science Behind the Quakes

The Cascadia Subduction Zone is a 1,000 kilometer fault that runs from Northern Vancouver Island to Northern California. The fault itself is a boundary between two tectonic plates: the Juan de Fuca tectonic plate is moving towards and getting forced under the North American plate that we live on.

A section of that boundary has become locked together – the plates are no longer sliding smoothly. So, all that forward movement is being stored up inside the rocks, waiting for the day that the energy will be released as a catastrophic megathrust earthquake, colloquially known on the Pacific Northwest as the ‘Big One’.

The tremors caused by slow slips are different from routine earthquakes that occur in the Pacific Northwest, and they aren’t felt on the surface because they originate so far underground.

During the slow slip, in late December 2015, around 8,000 mini-tremors were recorded. During this slow slip B.C.’s South Coast was hit by an earthquake that shook many people from their sleep just before midnight, in what one seismologist called the largest quake in the region in years. This 4.8M earthquake was recorded on December 29th, 2015 at 11:39pm in Victoria B.C.

Our regions seismologist Alison Bird describes the heightened risk, similar to the increased risk of driving in rush hour traffic.  “Going for a drive in the country on a Sunday, you’re not that likely to be in a car accident. But if it’s rush hour in Vancouver and there’s a game on … you’re more likely to be in an accident. You’re not necessarily going to be, but the probabilities are higher.”

“We are living in a seismically active area. We will have damaging earthquakes — they’re guaranteed,” Bird said. “A lot of people use that cycle to remind them to check on their kit, to review their plan, that sort of thing.”

There couldn’t be a better time to go through your emergency plan and purchase supplies. Find a local GetMyKit.ca Emergency Kit retailer, or visit our shop.   We offer free Emergency Preparedness Workshops and are looking for venues across British Columbia.  Check our Facebook page for events near you, or contact our office 1-888-673-1222.